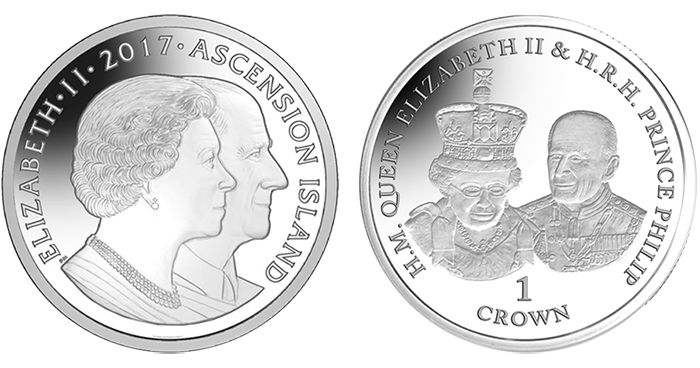 A Lifetime of Devotion

The government and treasury of Ascension have issued (20th July) a new crown coin which marks an astonishing and memorable life event of the longest-serving British monarch, Queen Elizabeth II, and her consort, Prince Philip, the Duke of Edinburgh. The royal couple have had an astonishing life together and have dedicated their lives to the duty of monarchy.

The couple first met at the Royal Naval College in Dartmouth in 1939 when a young Princess Elizabeth was just 13 years old (the then–Prince of Greece was 18 years old). They began exchanging letters for an extended period of time—including a time when both were serving in the Royal Armed Services during World War II. Princess Elizabeth was a mechanic and driver in the Women’s Auxiliary Territorial Service, and Prince Philip was one of the youngest first lieutenants in the Royal Navy. After the war, the couple eventually became formally engaged in 1947, following the Queen’s 21st birthday and after Philip requested permission from the king to ask for Elizabeth’s hand. The royal pair married later in the same year, and in November 2017 they will celebrate their platinum (or 70th) wedding anniversary.

Prince Philip was elevated to the rank of a Royal Duke just days before his marriage to Princess Elizabeth. He continued with his promising career in the Royal Navy until unexpected and tragic events just five years after they were married. The princess’s beloved father, His Majesty King George VI, who had been diagnosed with lung cancer the previous year, had succumbed to the disease on the 6th February 1952, aged only 56. The new Queen of Great Britain ascended the throne at just 25 years of age; she was also a young mother of two small children. Her splendid coronation took place on the 2nd June 1953, and although the transition changed their lives forever, the couple have always approached their royal duties with a sense of humour and affection for each other that, over the decades, is testament to their enduring love.

Part of the pomp and ceremony—as well as a constitutional obligation—of the sovereign is the State Opening of Parliament, a formal occasion that marks the beginning of a parliamentary session after a general election. During this elaborate ceremony, which showcases British history, culture, and politics, the Queen wears the Parliament Robe of State and the Imperial State Crown with all accompanying regalia. For over 500 years the Opening of Parliament has symbolised the unity of the sovereign, the House of Lords, and the House of Commons. The reverse design of the new coin focuses on this specific function of the British sovereign. 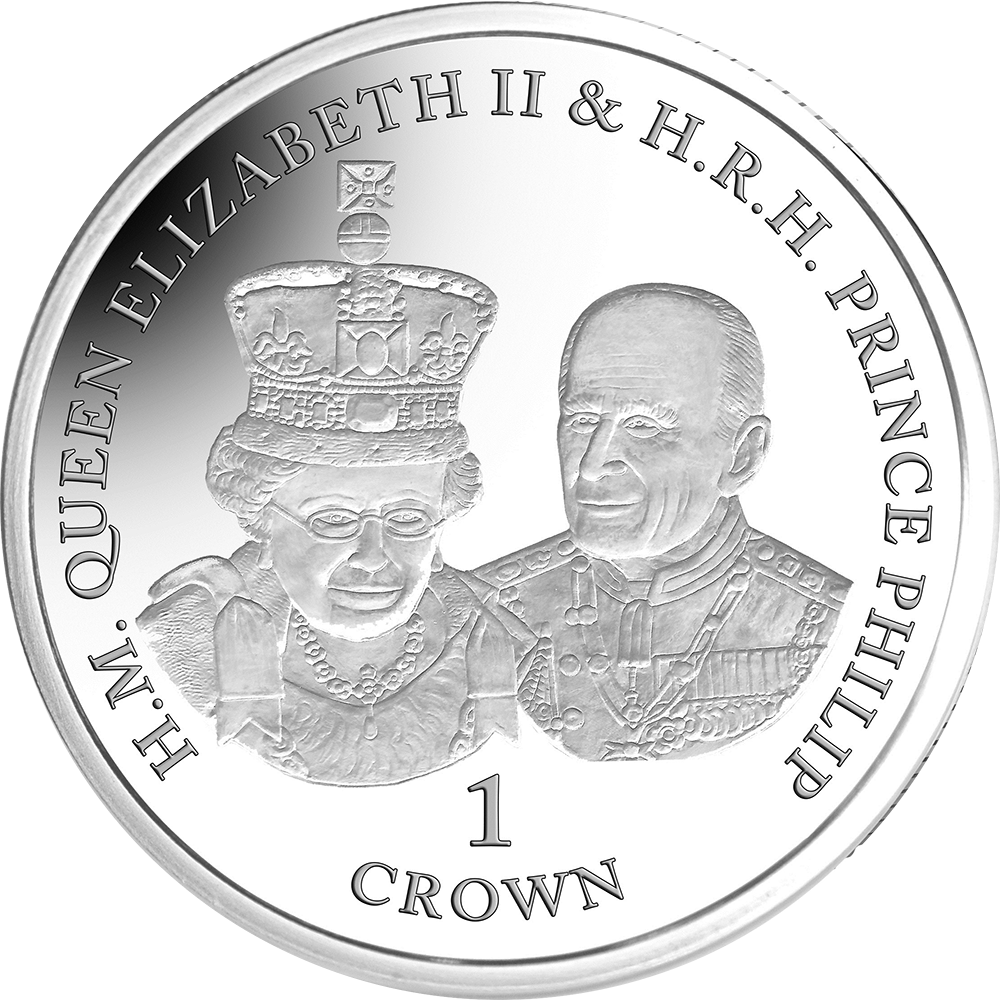 The coin is produced by the Pobjoy Mint, United Kingdom, on behalf of the government and treasury of Ascension. The reverse depicts HM Queen Elizabeth II and HRH Prince Philip at the State Opening of Parliament, in a design based on a portrait taken in 2016. 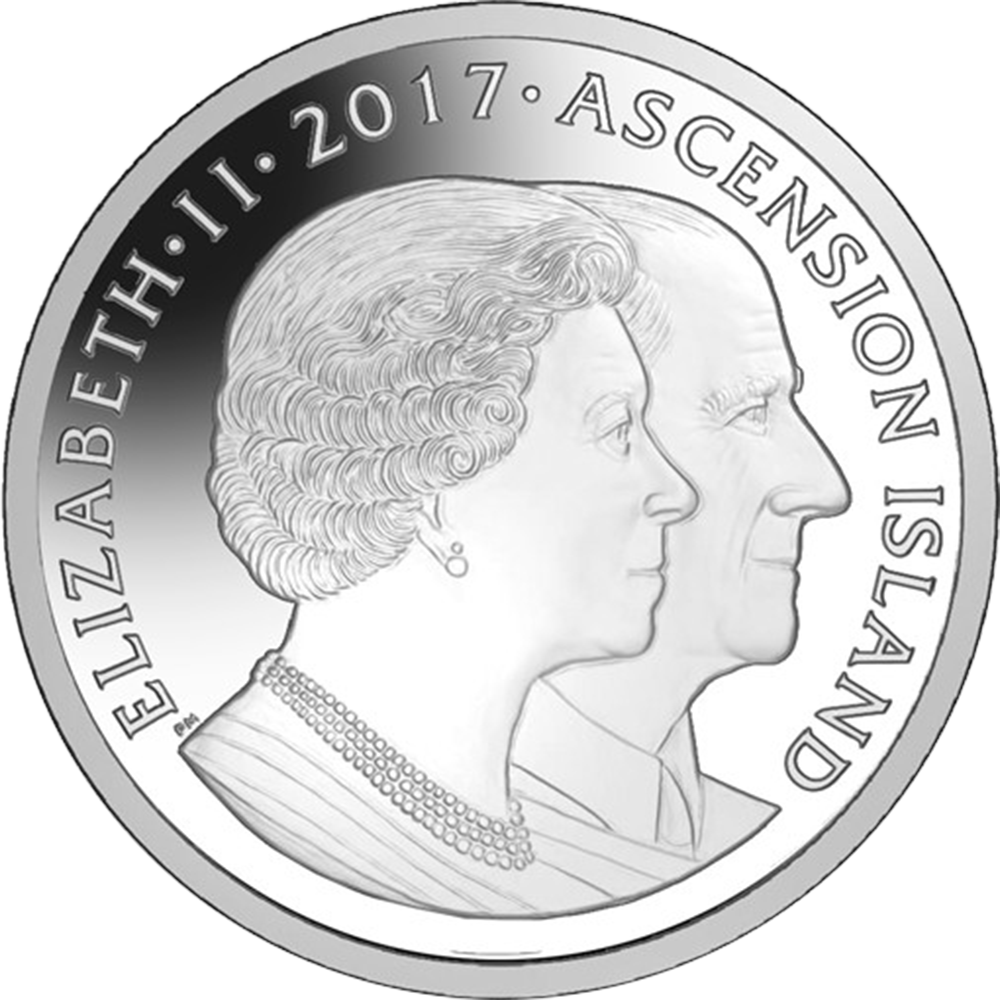 The obverse features a double effigy of HM Queen Elizabeth II and HRH Prince Philip together. It is a rare occurrence that a coin is issued with a dual effigy of the British monarch and consort, and it is the first time that this particular portrait has ever been used on a coin.

The issue limit for this coin will be 10,000 in Uncirculated cupro-nickel and 2,000 in Proof sterling silver. The Uncirculated coins are shipped in a blue presentation pouch. The Proof coins are individually enclosed in an acrylic capsule for protection and housed in a custom red presentation box with certificate of authenticity.