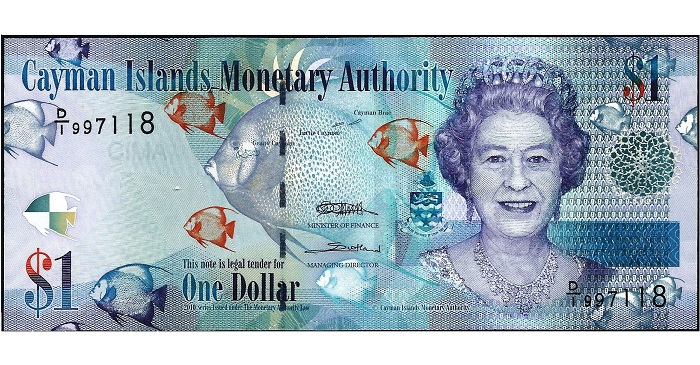 The Cayman Islands — known for their offshore bank accounts, sandy beaches, great snorkeling, and more — are a group of three individual islands located in the western Caribbean Sea. An autonomous British Caribbean territory, the islands did not have an indigenous population but were first settled by the British towards the end of the 17th century. The largest of the three islands — Grand Cayman, with the capital George Town — is followed by Little Cayman and Cayman Brac, smaller islands located approximately 75 miles east of Grand Cayman. The islands have a combined population of approximately 56,000, of which about 53,000 live on Grand Cayman. The Cayman Islands first issued their own bank notes relatively recently, in 1972, making the series of bank notes a great and affordable collection to attempt completion of. While the majority of notes in this series are relatively affordable, there are a few select issues that are more difficult to find.

The first series of bank notes was issued according to the Currency Law of 1971, and are dated as such on the bottom of the note face. All denominations featured a similar design on the face, with a portrait of Queen Elizabeth II at the right by Anthony Buckley. Each denomination used a different color scheme, with the $1 being predominantly blue, the $5 green, the $10 red, and the $25 brown.

The backs featured vignettes local to the islands, with a coral reef and fish on the $1 note, a sailboat and harbor scene on the $5 note, a beach scene on the $10 note, and outlines of the three islands on the $25 note. The bank notes were issued by the Cayman Islands Currency Board and signed by Vassel Johnson as chairman of the board.

A revised series of bank notes (“Series B”) was introduced in 1991. The portrait of Queen Elizabeth II on the front was replaced by a more updated version of her by Peter Grugeon. Designs were modernized, with more color added, but the back vignettes remained the same. The 1991 series was signed by Thomas Jefferson as chairman of the Cayman Islands Currency Board. This series does not include a $1 or $50 bank note, but both would be included again in subsequent issues.

In 1996 another revised series was issued, identifiable by the addition of more colors, although the basic designs remained the same. These are known as the “Revised series B” bank notes and would be the last issue of the Cayman Islands Currency Board. These were signed by George A. McCarthy as chairman. In 1997, the Cayman Islands Monetary Authority would be established, which would take over the responsibility of issuing bank notes for the Cayman Islands from the Currency Board. It did so for the first time in 1998, when the C series was introduced. The only noticeable change is the name of the issuer, which now reads “Cayman Islands Monetary Authority.” The $1 bank note was reintroduced; all denominations have updated security features but are otherwise identical to the 1996 series.

A new series was printed for 2001. This series did not include a $100 bank note, but instead, a $50 bank note was printed again for the first time since the 1974 series. The predominant color is turquoise, and the back design is the same as that for the 1974 $50 note, a classic Caymanian home. In 2003, the first commemorative bank note was issued for the islands, a $1 bank note commemorating the 500th anniversary of their discovery by Christopher Columbus. A special overprint was added to the center of the front that reads CAYMAN ISLANDS / 1503 *** 2003. Notes were issued into circulation but were also available in special folders for collectors.

Just two denominations, a $25 and $50 bank note, were issued for the 2003 series. The color scheme of the $50 note was altered to a multicolor of predominantly green and purple. This series also updated the signatures, with all notes issued since featuring two signatories: The top is the financial secretary while the bottom is the managing director, which has been Cindy Scotland since 2002.

Another new series was introduced in 2005-2006, which again updated security features and also included the $100 bank note again. These are signed by Cindy Scotland as managing director and Kenneth Jefferson as financial secretary.

With the introduction of the 2010 series, the Cayman Islands Monetary Authority introduced an entirely redesigned and modernized series. The portrait of Queen Elizabeth II was updated to a more recent one by Mark Lawrence, and the entire series features brighter colors and updated designs. The color of the $50 bank note was changed again, this time to purple. The back designs were also updated and feature local flora and fauna, except for the $100 bank note, which features an updated view of the financial center of George Town. This series is signed again by Cindy Scotland as managing director and William Bush as financial secretary. This was the final update to the bank notes and is the current series in circulation on the Cayman Islands, although the U.S. dollar circulates as well.

The various series might look a little complicated at first, but as they are all dated it is relatively easy to figure out what completes a collection. The scarcest notes are found in the first two series; most of the more modern series were sold to collectors at a small premium over face value and can be found in the marketplace relatively easily. Both the $10 and $25 notes from the 1971 and 1974 series are quite scarce, but they do come up for sale in Uncirculated condition. Due to its unusual denomination, the 1974 $40 note is very popular with collectors, but as it never circulated heavily it is quite easy to find in the marketplace. The 1974 $50 notes and $100 notes are more difficult to obtain thanks to their relatively high face value, but with a little bit of searching, both can be found in Uncirculated condition at relatively modest cost.

The most difficult bank note of the series to collect is not a regular issue, but an experimental paper issue that was released in limited quantities. Only 100,000 examples of the 1996 $10 bank note with X/1 prefix were issued into circulation and their special status was not known until after most had been withdrawn from circulation. Most seen today are in circulated condition, and Uncirculated examples are rare. If you do not include this experimental paper issue, the bank note series of the Cayman Islands remains one of the easiest series of the Caribbean to complete in Uncirculated condition. Colorful and instantly recognizable designs that are available with relative ease in Uncirculated condition make this a wonderful series to collect for both the beginner as well as the advanced collector looking for something new.