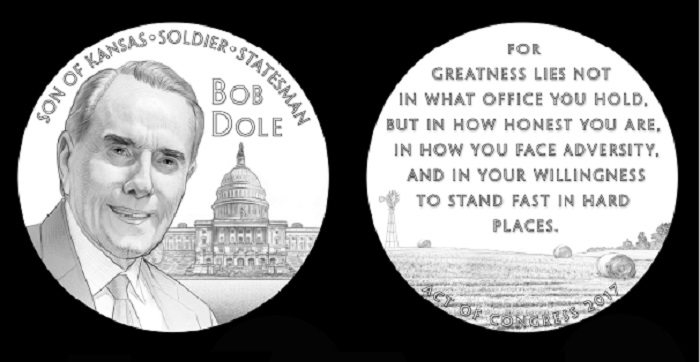 Last Wednesday, October 25, 2017, the Citizens Coinage Advisory Committee (CCAC) held a meeting to discuss the design of the upcoming Congressional Gold Medal to honor Bob Dole. Bob Dole is a lawyer, former congressman of Kansas, former Republican Leader of the United States Senate, and 1996 presidential candidate who is renowned for his valiant service in World War II. In 1942, he entered the United States Army’s Enlisted Reserve Corps, rising to second lieutenant in the 10th Mountain Division. In April 1945, while fighting southwest of Bologna, Italy, in the Apennine Mountains, Dole was grievously injured in the upper right shoulder by German machine-gun fire and nearly succumbed to his injuries. For his service fighting in World War II, he was awarded five different medals, including the Purple Heart. He was additionally awarded the Presidential Medal of Freedom by President Bill Clinton, shortly after being defeated in the 1996 presidential election by the latter. 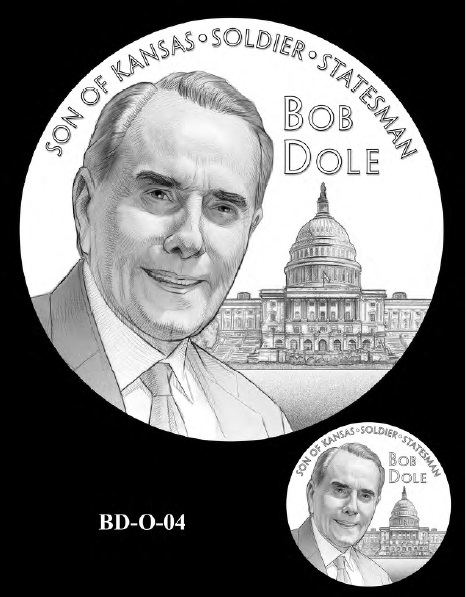 Unlike the previous CCAC meeting, which concerned the design of the 2019 Apollo 11 50th Anniversary commemorative coins, the Bob Dole Congressional Gold Medal design was agreed upon rather quickly by the various members, who favored design BD-R-04. The obverse features an image of Bob Dole with the Capitol behind him. Inscriptions on the obverse include SON OF KANSAS, SOLDIER, STATESMAN, and BOB DOLE. 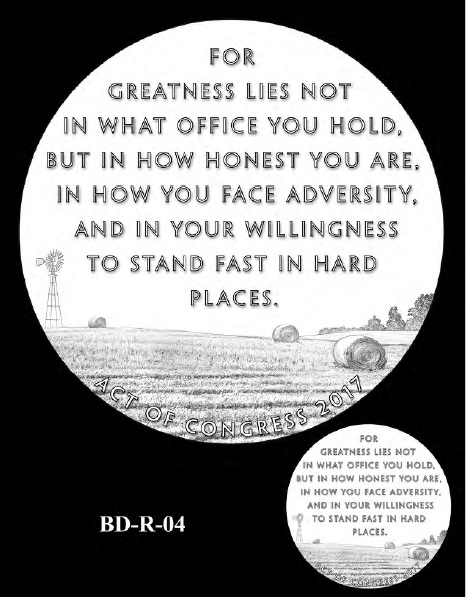 For the reverse, we are treated to a Kansas wheat field with a quote from then-Senator Dole: FOR GREATNESS LIES NOT IN WHAT OFFICE YOU HOLD, BUT IN HOW HONEST YOU ARE, IN HOW YOU FACE ADVERSITY, AND IN YOUR WILLINGNESS TO STAND FAST IN HARD PLACES. Additionally, ACT OF CONGRESS 2017 is displayed along the bottom.