The Bank of Latvia have issued (14th November) two 2-euro commemorative coins dedicated to the historic provinces of Kurzeme and Latgale. Since the re-establishment of Latvian independence in 1991, the division of Latvia into cultural and historical regions of Vidzeme, Latgale, Kurzeme, and Zemgale is stipulated by article three of the Satversme, or the Constitution of the Republic of Latvia.

For the Bank of Latvia’s contribution to national celebrations of the centenary of its first declaration of independence in 1918, four €2 commemorative coins featuring the coat of arms of Latvia’s cultural and historical regions will be issued by the end of 2018. The symbols incorporated into the crests, or coat of arms, established by the Regulations on Coats of Arms of Latvia’s Regions, adopted on the 26th April 1930, in accordance with article 81 of the Satversme, are related to historical developments in the present-day territory of Latvia. In 2012, a special law was passed to ensure legal protection of these coats of arms as national symbols.

The coins are produced by the Staatliche Münze Baden-Württemberg, on behalf of the Bank of Latvia, and are designed by artist Laimonis Šēnbergs while the plaster models are created by Jānis Strupulis. 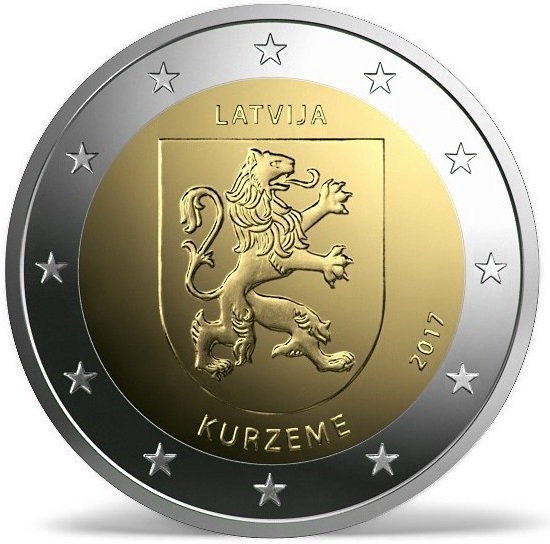 The first coin is dedicated to Kurzeme. The coat of arms of Kurzeme has been carried over from Gotthard Kettler’s coat of arms. He was the first Duke of Kurzeme and Zemgale. The crest includes a lion standing and facing to the right. 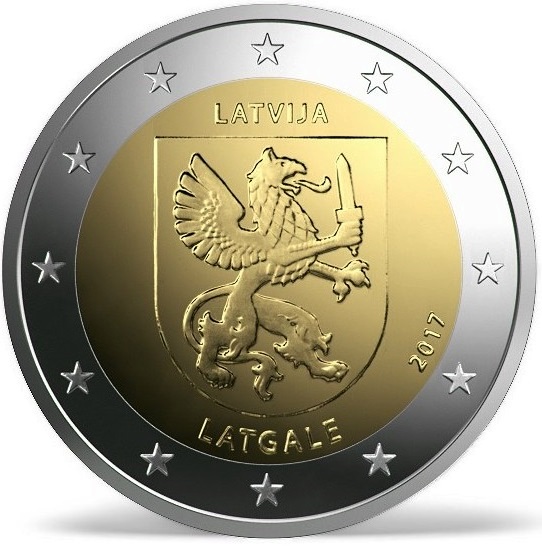 The second coin honours Latgale. A standing griffin is depicted facing to the right on a blue background with a sword in its right paw. Images of the coat of arms of Latvia’s cultural and historical regions had not yet been used in coin design until the issue of this new series. The reverse side of the €2 coin is that of the common reverse design used on all currently circulating Euro-zone type coinage. The finely milled edge of both coins features the inscription DIEVS SVĒTĪ LATVIJU (God Bless Latvia), the words separated by stars.

These coins, featuring the coat of arms of Kurzeme and Latgale, continue the series of 2-euro commemorative coins dedicated to Latvia’s cultural and historical regions. It is one of Latvijas Banka’s contributions to the country’s centenary. A 2-euro commemorative coin with the coat of arms of Vidzeme was issued last year. In the country’s centenary year of 2018, a coin dedicated to Zemgale will conclude the series of coins. The commemorative coins will be produced for both circulation and collector’s pieces.