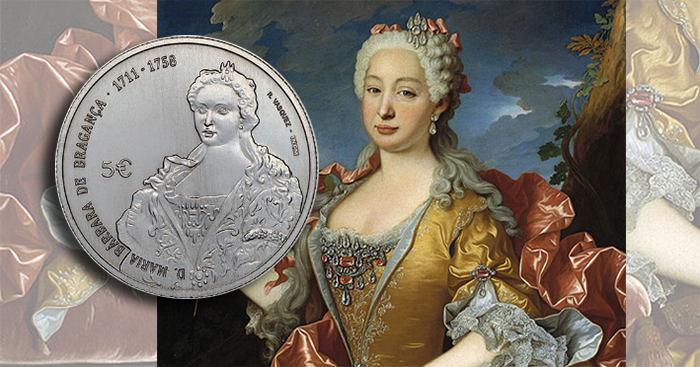 The Impresa Nacional Casa da Moeda have issued on the 9th August their latest coin in the fascinating series “Queens of Europe,” which includes many of the royal brides who married into some of Europe’s most influential and important ruling dynasties. The latest coin tells the story of Queen Maria Bárbara de Bragança, who was the consort of King Fernando VI of Spain. 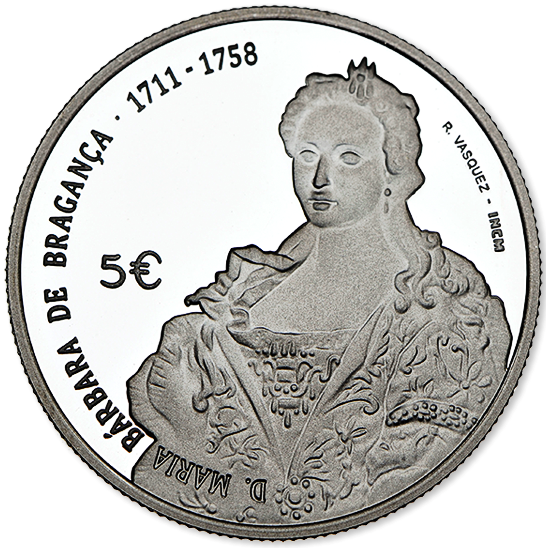 The coin was designed by artist Rui Vasquez and features a representation of the Princess Maria Bárbara shortly after the time of her marriage, as was painted by the artist Jean Ranc, circa 1729. The coin’s denomination of €5 is placed to the left of the portrait, with the inscription D. MARIA BÁRBARA DE BRAGANÇA‎ · 1711 – 1758. 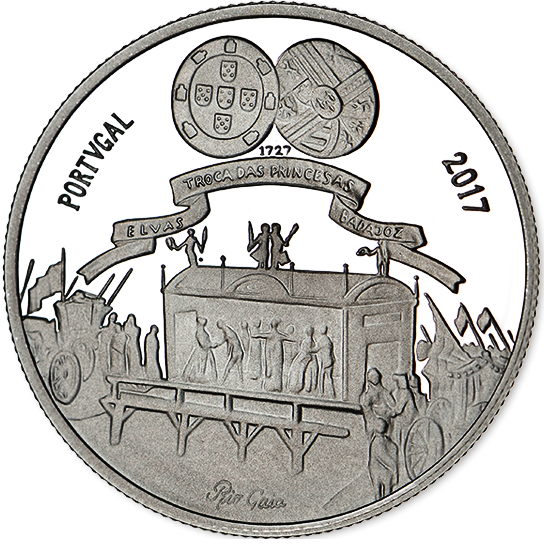 The reverse depicts the actual princess exchange, a ceremony that took place in the middle of the Caia River, between Elvas, Portugal, and Badajoz, Spain, on a grand wooden palace bridge built to celebrate the double marriage. This double marriage included the children of King João V of Portugal—Maria Bárbara and José—to the children of Felipe V of Spain—Fernando VI and Mariana Vitória. The two crests of each royal house are placed above the primary design.

The coin, which is the last in the series, is available in three versions: cupro-nickel, silver, and gold. Both the silver and gold versions are presented in a custom wood case with a numbered certificate of authenticity. Please visit the website of the INCM for additional information on this and other coins on offer.

A Queen of Substance and Fortitude: Maria Bárbara de Bragança, Queen of Spain 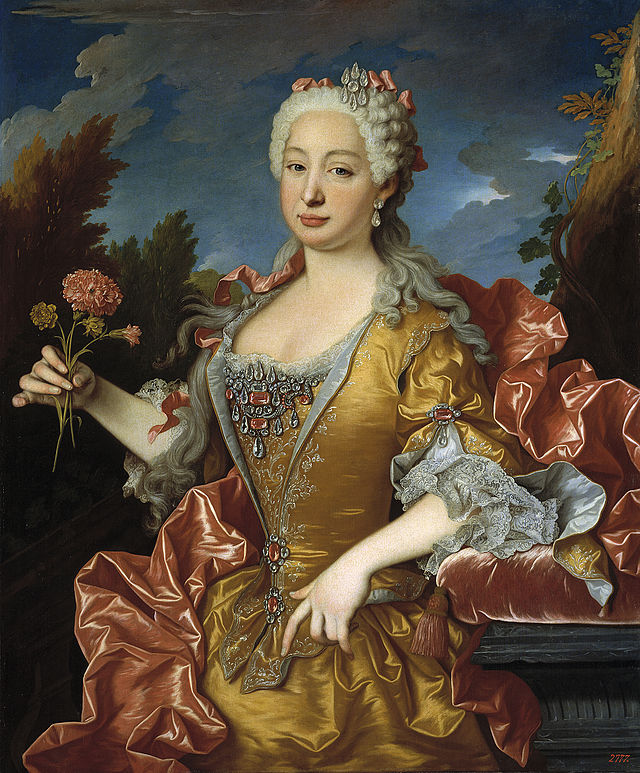 Born to João (John) V of Portugal on the 4th December 1711, Maria Madalena Josefa Teresa Bárbara—so named in honour of Saint Barbara, the saint of her birthday and a name not previously used among Portuguese royalty—was simply referred to as Maria Bárbara or Bárbara. The baby infanta of Portugal was born as heiress presumptive to the Portuguese throne and styled as Princess of Brazil, but her status as heiress presumptive was removed when the queen gave birth to a son two years later.

Princess Maria Bárbara was considered a gifted child; she was intelligent, well educated, and had a talent both for languages and music. She grew into an accomplished harpsichord musician, and though perhaps not considered especially beautiful, Maria Bárbara entered into what was believed to be a marriage of love as well as one serving the purpose of the state. Despite the infanta’s having been described as “plain-looking” by courtiers, it was noticed that her new betrothed seemed taken aback by her lack of beauty. He nevertheless was charmed by her appreciation of music, which he shared, as well as her love of literature, and her overall degree of self-confidence—something which had eluded him during his young life.

Maria Bárbara was married to Fernando (Ferdinand), prince of the Asturias, on the 20th January 1729. He was just 16 years of age, and she just 18. The bride’s brother, –José, prince of Brazil and later king of Portugal, married the infant Mariana Vitória the day before, further cementing the ties between the two Iberian kingdoms. When Fernando did succeed his father in 1746, Maria Bárbara, newly queen, remained devoted him. He, in turn, had become deeply attached to her as well, relying on her advice and intuition. Maria Bárbara had over the years grown into an able consort who deliberately tried not to outshine her husband, as her predecessor, Elizabeth Farnese, had done with King Felipe V.

The new queen presided over magnificent parties and concerts at the Royal Palace of Aranjuez, which was her favourite retreat. She eventually became very accomplished in the art of strategic entertaining, which benefitted the crown, courtiers, and ministers. Queen Bárbara participated regularly in the affairs of state, and the ministers in charge respected her judgement to the extent that they presented her all documents of state before doing taking them to the king. It was she who advised him as to how to achieve the desired results from the ministers, who served both the Crown and the people.

Sadly, the royal couple produced no children or heir, with the exception of Queen Bárbara’s delivering a stillborn son in 1733. She suffered from severe asthma for much of her life and towards her later years she became quite overweight, further complicating her already delicate health. The queen predeceased her husband when she died at the Royal Palace of Aranjuez on the 27th August 1758. Her death was said to have “broken her husband’s heart.” He fell into a state of deep grief in which he would not even dress. He followed her to his own premature death, barely less than one year after, on the 10th August 1759. He was buried at the convent of the Salesas Reales, alongside his beloved wife. Fernando VI was succeeded by his younger half-brother, Carlos III.