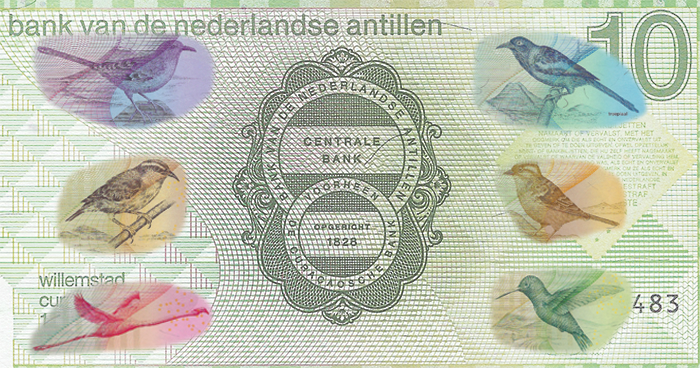 (All images courtesy of the author)

The various islands that made up the Netherlands Antilles prior to 1986 (Aruba, Sint Maarten, Saba, Sint Eustatius, Bonaire, and Curacao) were initially part of the Dutch colony of Curacao and Dependencies. After 1954, the islands received semi-autonomous status as a country within the Kingdom of the Netherlands. Banknotes were first issued for the colony around 1828, and the Curacaosche Bank would be the sole issuer of paper money throughout most of its history, with the last issue being dated 1960, already after the Netherlands Antilles had been formed. In 1962, the Bank of the Netherlands Antilles, a successor of the Curacaosche Bank, issued its first banknotes. Even though the bank was officially dissolved in 2010 and succeeded by the Central Bank of Curacao and Sint Maarten, banknotes in its name are still being issued. It’s a little bit of a confusing situation thanks to the complicated political history of the various islands, but the fact is that the current (and probably final) series issued by the Bank of the Netherlands Antilles is a fascinating series to collect, filled with very scarce and underrated dates.

Initially introduced as six denominations (5 gulden, 10 gulden, 25 gulden, 50 gulden, 100 gulden, and 250 gulden), the series was designed by Oscar Ravelo. The original series was dated March 31, 1986, but were not shipped to the Antilles until late 1987, and they first entered circulation in January of 1988. Higher denominations were also planned, but to this date have not come to fruition; in fact, the 250-gulden note was issued only in 1986 and even then saw very limited use. The 5-gulden note was also discontinued after 1994 when it was replaced by a coin of the same value.

50 gulden of the 1994 series. Notice the lack of notable security features. These were added with the 1998 series.

100 gulden: More modern security features, including Omron rings, are seen on this 2011 100 gulden.

The 250 gulden is the highest denomination and was printed for the 1986 series only. It saw very limited usage.

This colorful series features birds local to the various islands. The design of the series has remained virtually unaltered since its introduction except for the date and signatures, although additional security devices were introduced with the 1998 series. The table below gives an overview of the various designs, colors, and dates of issue:

* English name. The name in Dutch is printed on the notes.
** As of September 2017, the 2016 series has seen very limited circulation.

The list of dates above was assembled using the official press releases from the bank. The astute collector will notice that three notes in the Pick catalog (Standard Catalog of World Paper Money, 1961 to Present) are missing from the above listing. These notes do not exist and they are erroneously listed in the catalog, one of the reasons why collecting this series is not straightforward. These nonexistent notes are:

Now, since these notes have been issued only in the last 30 years or so, one would perhaps assume that the series is easily completed. One would assume that while the notes are appealing, they are perhaps not worth seriously collecting. However, nothing is further from the truth. There are a few complications with this series, making it more challenging to complete a date collection than one would assume.

First of all, even though some collectors put the 1986 series aside at the time, all but the lowest denominations have mostly disappeared from the marketplace. Try finding a 50 or 100 gulden of 1986 in full Uncirculated condition; finding one of these is nearly impossible. One would presume that the 250 gulden would be even more difficult, but this is not the case. As it only saw limited circulation, the bank kept large quantities on hand, and in the past decade or so it has run a side business of selling certain earlier issues to collectors at a small premium over face value. While the bird series is not heavily affected by this, some earlier notes previously known as great rarities are now considered common. The 500 gulden of 1962, with a printing of 5,000 notes, is one of these issues that was once a great rarity but can now be found easily from many different sources at a small premium over face value.

While the bank sometimes keeps stock of older dates on hand, this is not always the case, and sometimes new dates are quietly released into circulation, taking the collector community by surprise. This happened with the 2001 issue, which saw 10-gulden, 25-gulden, 50-gulden, and 100-gulden banknotes issued. Printed in rather small quantities to start with, they quietly entered circulation, and all are very scarce in Uncirculated condition, in particular, the 10 gulden. Other scarce dates are the notes from the 1990 and 1994 series (except for the 50 gulden of 1994, which also was sold to wholesalers at a later date in quantities enough to satisfy collector demand), as well as some of the more recent 100-gulden notes.

A modern key note, the 10 gulden 2001 quietly entered circulation and is very difficult to find in Uncirculated condition.

Another problem that the collector will face is that the catalog values for this series are very inaccurate. Not only are values infrequently updated (the 250 gulden of 1986, for example, is listed at $750 in Uncirculated, but can be found at a fraction of that price since the bank sold their surplus to collectors), but new issues are listed for very high amounts that are unsubstantiated by the current market. On the other hand, rare issues, such as the 2001 series, are listed at very low prices (but in line with other dates of their respective denominations), making the Pick catalog virtually worthless. It’s very important to do your homework or you will end up overpaying for many notes, but on the other hand, there are some rarities that would be very good buys if you can get them for catalog value.

The frequently used 25-gulden denomination has gone through many different printings since 1986, the most recent being 2016.  To this day the design contains the name of the Curacaosche Bank in the lower part of the central emblem on the reverse: Voorheen de Curacaosche Bank (“previously known as the Curacaosche Bank”), the predecessor to the Bank of the Netherlands Antilles.

There is a lot more to be said about this fascinating series, but hopefully, this article will have given you a good introduction to these beautiful notes. For further reading, I can wholeheartedly recommend the three-volume set by Theo van Elmpt, published in English, which covers all banknotes of the various issuers from 1828 to 2008, and gives a wealth of valuable background information such as design elements and printing quantities. The books are simply called Bank of the Netherlands Antilles, Paper Currency from 1828 to 2008, and are the definitive standard reference to this fascinating collecting field. The Netherlands Antilles gulden (or guilder) is set to be replaced in the coming years, and although plans have not been finalized yet, it is very well possible that these beautiful banknotes will soon be withdrawn from circulation.