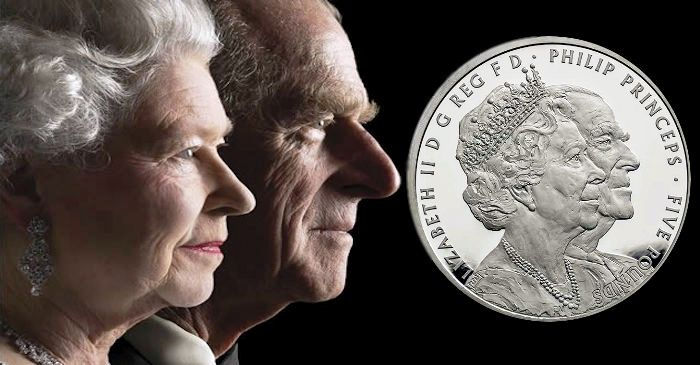 (All photos courtesy of the Royal Mint)

The Royal Mint have unveiled (2nd October) the new crown coins to mark the 70th (platinum) wedding anniversary of HM Queen Elizabeth II and HRH Prince Philip, the Duke of Edinburgh. The anniversary is unprecedented in the British Royal family, as no other sovereign or consort has ever achieved this milestone. The coins celebrate the day 70 years ago when the young Princess Elizabeth, daughter of King George VI, married her fiancé in a glittering ceremony just two years after the fighting and devastation of the Second World War came to an end. The wedding was said to be just what the country needed — a reason to celebrate more than just the victory over the Third Reich in Germany and the Imperial Army in Japan.

Their story is timeless and crosses over from royalty to commoner — rich or poor, the love which overcame obstacles and reservations on the part of the government at the time and the British people. In July 1947, the couple finally announced their engagement and were married at Westminster Abbey in the presence of 2,000 guests on the 20th November 1947. The service was broadcast live to 200 million radio listeners and was a welcome celebration as Britain faced post-war austerity, which still included rationing of many day-to-day items. It had come to the attention of the British public that Princess Elizabeth had to save ration coupons in order to make the wedding gown she was married in. 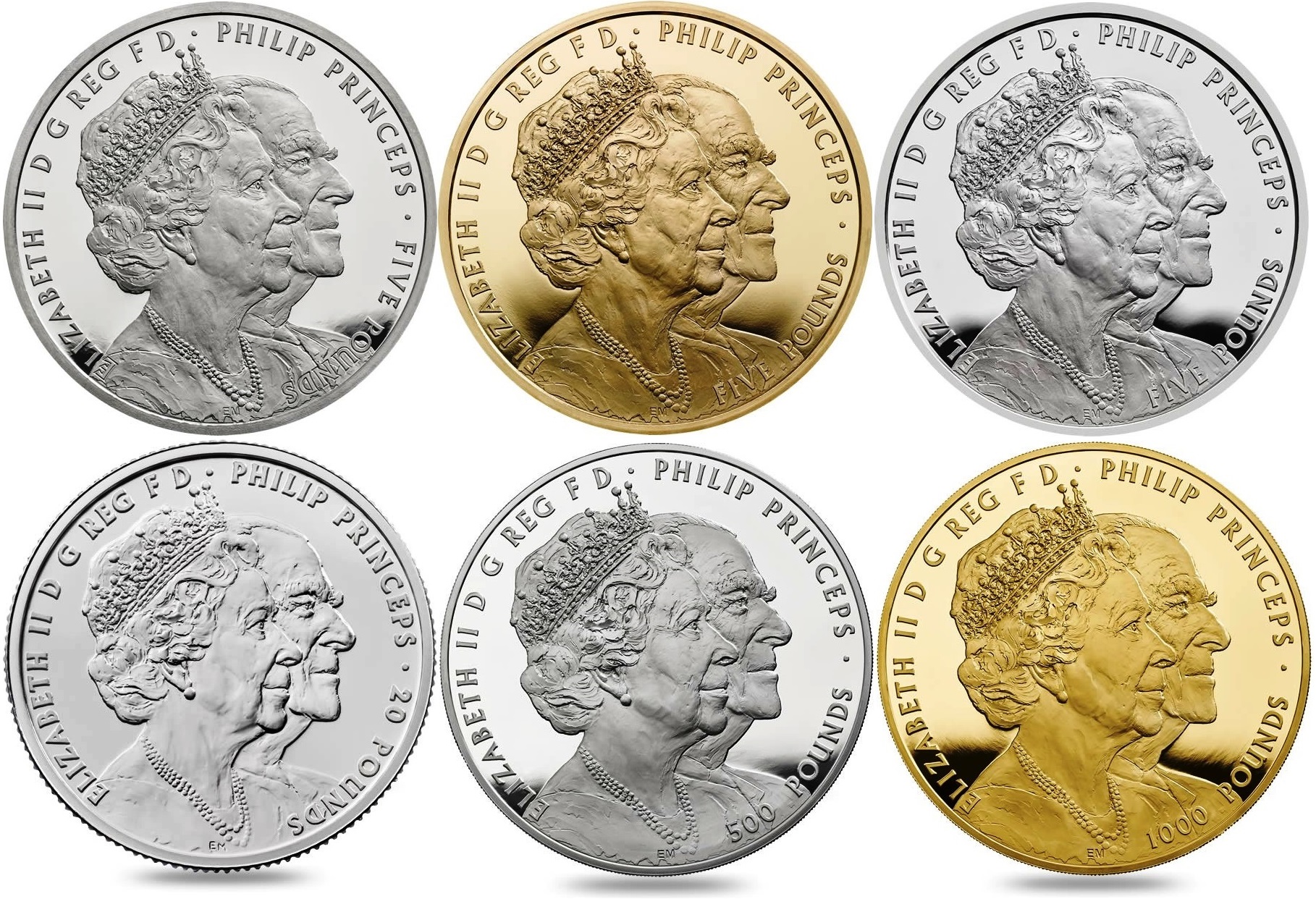 The obverse side is the work of Etienne Millner, and includes a dual portrait of both Her Majesty Queen Elizabeth II and His Royal Highness, the Duke of Edinburgh, facing to the right. The legend around the portraits includes the name and title of Prince Philip. This is the fifth time he has appeared on a British coin, and the third time along with the Queen. The obverse also includes the denomination of the coin from, £5 to £1,000.

The reverse side of the coin is designed by veteran Royal Mint artist John Berghal and depicts the royal couple appearing on horseback, as they have been seen countless times during the Trooping of the Colour ceremony. It also depicts the official celebration of the Queen’s birthday. The depiction offers an equestrian theme which is very close to both the Queen and the Duke. The commemorative inscription around the primary design reads WEDDED LOVE HAS JOINED THEM IN HAPPINESS 1947-2017.

The reverse side of the platinum wedding anniversary coins is also designed by John Bergdhal. It depicts crests (or shields) which represent the Queen’s royal House of Windsor and the royal house of the Duke of Edinburgh. The design is inspired by the heraldry and the uniting of both historic families. The commemorative inscription just under the shields reads 70 YEARS OF MARRIAGE 2017. 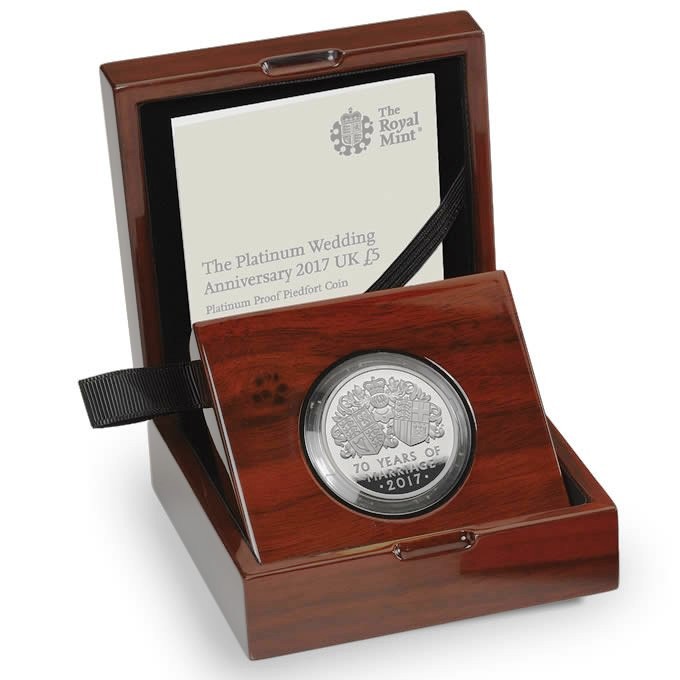 The silver, platinum, and gold Proof coins are all specially encapsulated and presented in a variation of custom cases and display options which are accompanied by numbered certificates of authenticity.

The platinum piedfort, gold and silver kilo, and gold 5-ounce editions of the Platinum Wedding Anniversary coins include an additional exclusive gift — the “Princess Elizabeth’s Wedding Day” book. This is a reproduction of the book released in 1947, containing details and beautiful photographs from the special day. 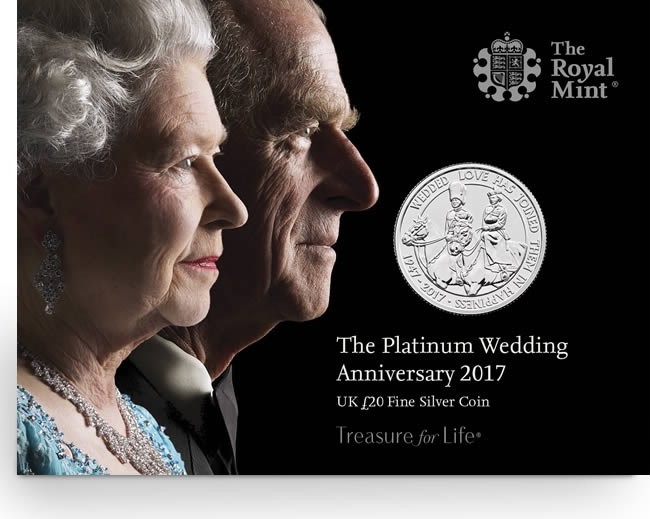 The Brilliant Uncirculated £5 crown and face value £20 silver are presented in a colour folder.

For additional information about these and other coins retailed by the Royal Mint, please visit their website.

The following quotation was a tribute paid to HRH Prince Philp by HM Queen Elizabeth II on the occasion of the 60th or golden wedding anniversary in November 2007:

He is someone who doesn’t take easily to compliments but he has, quite simply, been my strength and stay all these years, and I, and his whole family, and this and many other countries, owe him a debt greater than he would ever claim, or we shall ever know.