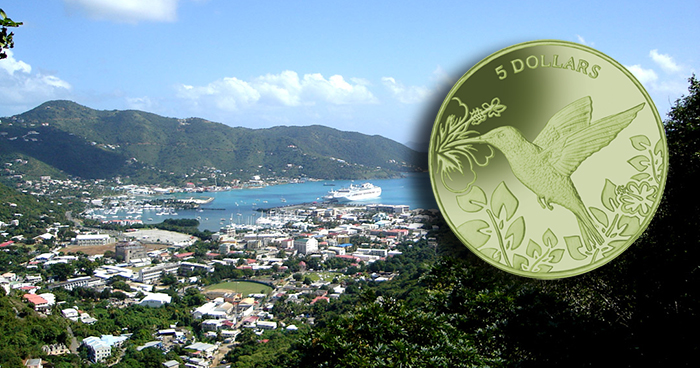 The island of Tortola is the largest of the British Virgin Islands (shown here before the hurricane; photo by Henry aw). Among the coins Pobjoy has produced for BVI are the popular nature coins in tinted titanium; the $5 hummingbird coin shown is one of the latest issues. Others in the series have featured a swordfish, seahorses, and a great white shark.

As most Coin Update readers know, the Pobjoy Mint is a private company in the United Kingdom that produces circulating and collector coinage on behalf of governments, central banks, and major companies worldwide.

One entity with which Pobjoy has had a long-standing arrangement, the British Virgin Islands (BVI), was among the many places hit by Hurricane Irma last weekend. The British Overseas Territory, which is part of the Caribbean archipelago east of Puerto Rico, consists of the following islands: Tortola, Virgin Gorda, Anegada, and Jost Van Dyke (in addition to 50 other smaller islands and cays). The islands have a total population of about 22,000, of whom approximately 18,000 live on Tortola.

In its efforts to assist in the area’s recovery, Pobjoy has issued the following statement:

Hurricane Irma—a category 5 hurricane—passed through the British Virgin Islands on 6 September at around 2pm AST. The hurricane directly hit the Territory and whilst we are currently unaware of the full extent of the damage, it is evident that the Islands have been severely impacted.

To try and offer some relief to the affected islanders, Pobjoy Mint will be donating 20% of the sale value of all Proof Silver and Cupro Nickel coins (retail and wholesale) issued on behalf of the British Virgin Islands, to a fund that has been set up by the Islands Government.

All British Virgin Island legal tender coins can be found at the below link. Any help will be much appreciated by the islanders.

Here at Coin Update, our hearts are with all who were adversely affected by Hurricanes Irma and Harvey, and we encourage all our readers to support the relief efforts.