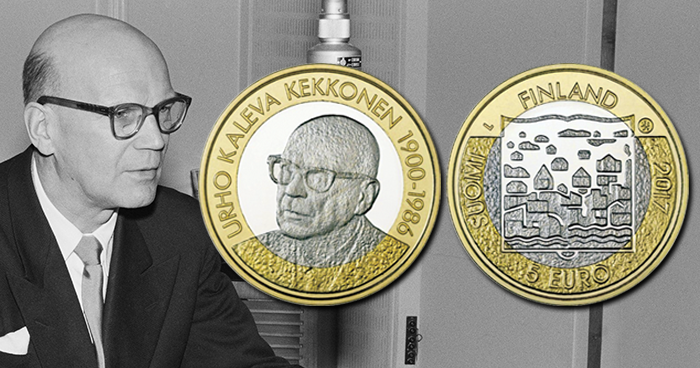 The Mint of Finland have issued their last coin in the popular “Presidents of Finland” series, which included eight coins featuring past and deceased presidents of the country since it gained independence in 1917. In addition, the series is issued as part of the national centenary celebrations in Finland for 2017. The last coin in the series features H.E. Urho Kaleva Kekkonen (1900–1986), Finland’s eighth president, who served from 1956 to 1981. At 25 years as president, he was the country’s longest-serving head of state. Kekkonen’s long tenure as president took the country from being an emerging, agriculturally oriented economy to a modern economic success story. Kekkonen also followed a strict policy of political international neutrality which colloquially defined “Finlandisation” to mean “domination by Soviet intrigue.” The eighth president sought to change this definition to “a policy of independence and neutrality.” 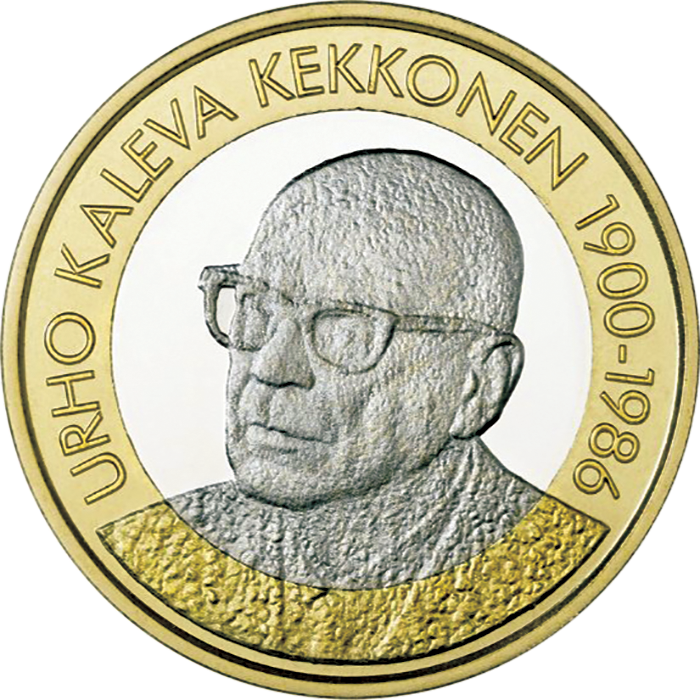 The bi-metallic collector coin is designed by Tero Lounas. The inner disc features a portrait of President Kekkonen in three-quarter profile toward the left with the lower part of the bust extending onto the golden ring, on which the text URHO KALEVA KEKKONEN 1900–1986 surrounds the primary design. 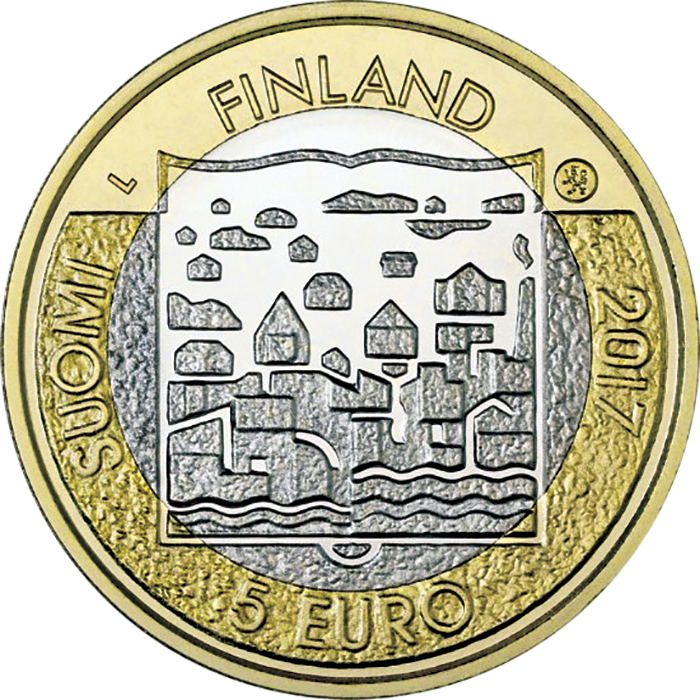 The reverse, which is common to all eight coins in the series, features a landscape of Finnish fields framing an open book depicting a constructed urban environment. The motif symbolises the president’s mandate from the people. 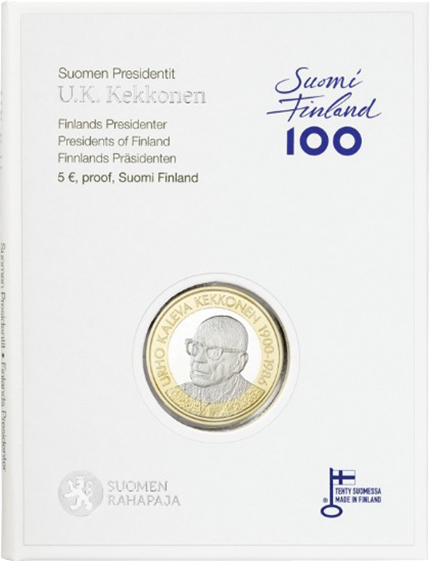 The series has been produced in conjunction with Finland’s centennial anniversary of independence, which is officially marked this year with several national celebrations. The Proof-quality coin is encapsulated and housed in a white folder specifically designed for this series and national anniversary. The Kekkonen coin concludes the eight-coin series in its entirety. For additional information on this and other coins on offer, please visit the website of the Mint of Finland.

The other coins in the “Presidents of Finland” series are as follows:

A President for Every Season: Urho Kaleva Kekkonen 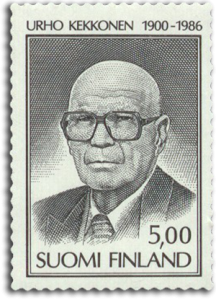 Urho Kaleva Kekkonen’s administration is credited for leading Finland’s slow emergence from the long shadow of two military defeats by the Soviet Union into self-assured participation in international affairs.

Kekkonen was born on the 3rd September 1900, in Pielesvesi, as the son of a lumberman. He was 17 years old when Finnish independence was declared and 18 when he became an officer in the White Guard which engaged in a civil war against the Moscow-supported Reds. Kekkonen studied for his law degree at Helsinki University, where it was said he helped to obliterate the tsar’s monogram on the university’s façade with a coating of tar.

Before the war between Finland and the USSR and World War II, he earned a doctorate in law at Helsinki University; he was 36 years old. Kekkonen also won a seat in parliament and entered the government as minister of justice. He served through the years in several ministries, including serving as speaker of parliament. 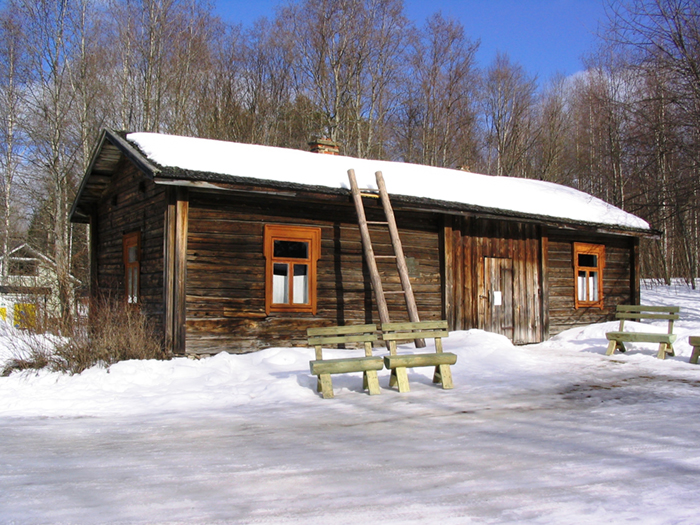 The Kekkonen presidential era began on a precarious note, since the new president brought with him a reputation as an often Machiavellian politician. This reputation had perhaps been earned undeservingly during a political career that included serving five terms as prime minister. There was no controversy in Finland over the necessity to maintain a policy of strict neutrality, but there was over his judgment on how this should be achieved or maintained. To Kekkonen’s dismay, he was denounced by political foes as a cynical politician who was playing a dangerous game with the Soviet Union to both remain in office and keep his agrarian Center Party in a dominant position.

His first term in office as president, in March 1956, came after an uneasy period in which Finnish leaders dared not even mention the word or policy of “neutrality” for fear of provoking Moscow. Finland’s postwar policy of neutrality had been carefully developed and delicately cultivated during the administration of his predecessor, Juho Paasikivi. It became the primary task of Kekkonen to use diplomacy to convince Moscow that he, too, could be trusted to guide Finnish affairs in a direction that would pose no threat to the Soviet Union. Thus, under a Kekkonen presidency, Finland was able to safeguard and expand trade with its major economic partners in the West. During this period of economic expansion, Finland also became an associate member of the British-led European Free Trade Association and organised a special relationship with the European Economic Community.

Give and Take, but at What Cost?

Economic conditions at the time improved the Finnish state, and the country enjoyed a modicum of political calmness after the war which had eluded many countries in the West. The level of trust that Mr. Kekkonen entered into with Moscow led to a shattering of the presidential election process in Finland during his quarter of a century in office. Moscow continued to make it abundantly clear at the end of each of Kekkonen’s six-year terms that they would prefer to see him continue in office. Thus, normal elections proved impossible in Finland, and it would not be until January 1982, and Kekkonen’s resignation, that President Mauno Koivisto (1923–2017) would win in a landslide victory, finally freeing the country from Moscow’s external pressure.

President Kekkonen was chosen in a normal election only once—and that was during his first race in 1956, when he won on the third ballot in Finland’s electoral college by the narrowest of margins: 151 to 149. Another election battle appeared to be looming as his first six-year term drew to a close. However, his opponent, Olavi Honka, a civil servant who had actually been endorsed by five parties, withdrew in late 1961 under pressure from new Soviet demands for military consultations. Honka stated that his removal from the campaign would be “in the national interest.”

The Soviet government questioned whether the attempt to defeat President Kekkonen was a disguised move to change Finnish foreign policy. Their suspicions that a change in the president at that time would not be in Finland’s interest were eventually confirmed. From that time on, elections were a formality, and no political party was willing to chance Soviet displeasure by running a real candidate against President Kekkonen. As a result, formal elections with only nominal opposition candidates were held in 1962, 1968, and 1978, with the 1968 term being extended by act of parliament from six years to 10. The special legislation was decided upon at a time when Finland was negotiating for its Common Market membership. Another reason for the extension, according to close presidential associates, was Soviet Union’s demand for absolute guarantees that President Kekkonen would continue as president long enough to ensure that this new EEC association would bring about no change in Finnish foreign policy towards Moscow.

Road to Freedom from External Influence

During these tumultuous years, President Kekkonen had made clear in numerous interviews that Finland’s freedom of action on the world stage depended directly on the degree of trust Finland enjoyed in Moscow. He reiterated that the Finnish Constitution charges the president with the conduct of foreign policy and he stressed that his interest was in keeping the “freedom of maneuver” at its most advantageous.

Kekkonen knew that Finland could not proceed haphazardly on the assumption that everyone knew its foreign policy was one of neutrality and friendship with the Soviet Union. Finland could also never take their foreign policy for granted but must, on the other hand, reconcile themselves to it every day. One of the more important aspects of Kekkonen’s presidency was time spent cultivating Soviet leaders, which he managed with frequent, private visits to the Soviet Union for hunting and other leisurely pursuits as well as more official visits. It was during these many visits, and with the visits of Russian officials to Helsinki, that he took the opportunity to show typical Finnish hospitality and entertain the Russians in the presidential sauna, as well as at luncheons and dinners.

During these visits, he would talk about strengthening Soviet-Finnish relations and also took the opportunity to politely remind the Russians of the stark everyday differences between the lives of Finnish and Soviet peoples. There was one particular polite but blunt exchange with General Secretary Nikita Khrushchev in September 1960. The Soviet leader used a luncheon speech in Helsinki as an occasion to suggest that the Finns deliberately elected anti-Soviet politicians into their government—and that they did so at their own peril. President Kekkonen politely declared in turn:

The leaders of the Soviet Union know that under all circumstances we defend our own system because we regard it best suited to us. 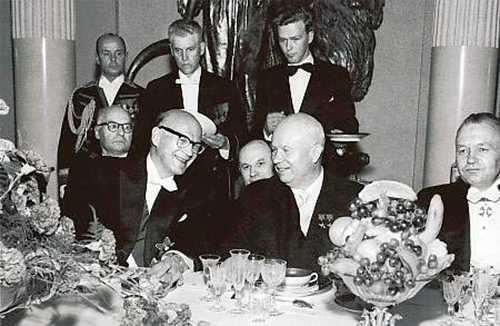 Throughout his presidency, he was referred to in government circles as Finland’s “trump card,” which could be played during touchy or precarious times in relations with Moscow. Kekkonen seemed able to take risks and emerge unscathed, as he had done in the latter half of 1960. President Kekkonen visited Moscow to clear the way for Finland to become an associate member of the European Free Trade Association. As a measure to attract the attention of General Secretary Kruschev, the Finnish president took off his shoe during the luncheon in a motion which imitated Mr. Khrushchev’s at his United Nations speech, when he famously pounded the table with his shoe to attract the attention of the UN secretary-general.

At the same time, Kekkonen was placating the concerns of his powerful neighbour to the East, which involved ensuring Soviet acceptance of Finland’s foreign policy. He also sought Western recognition of Finnish neutrality. In the early 1960s, President Kekkonen undertook a series of strategic visits for that purpose, with the principal one being held in Washington in 1961. He received the desired acknowledgment from President Kennedy, who publicly expressed his “understanding of why Finland is neutral,” and also reflected the State Department’s reluctance to assign the word “neutrality” to the Finnish government. 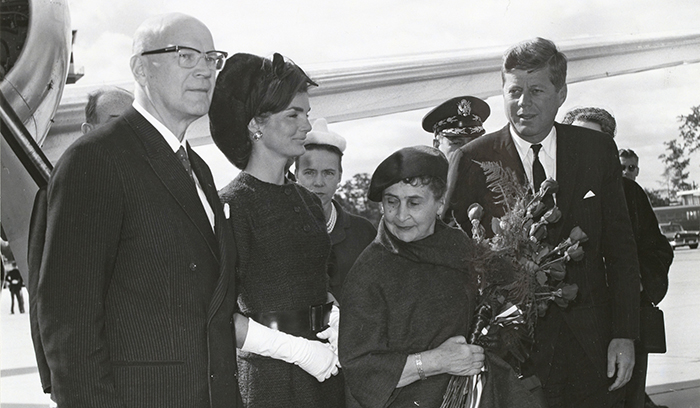 Nevertheless, President Kekkonen was welcomed as the first Finnish head of state to the White House. Thus, a clarification of their precarious position in the world was made and an emerging friendship was also strengthened.

Toward the end of his tenure, Mr. Kekkonen grew increasingly concerned over the term “Finlandization” in Western Europe to describe a nation’s drift under Soviet domination. He and other Finnish officials would have preferred to argue or point out that the name “Finland” should be properly attached to the definition of independence and neutrality rather than dominance by one country over another. This was done by a number of speeches and interviews, but the perception would remain for many more years, almost until the dissolution of the Soviet Union in 1991.

Urho Kekkonen announced his resignation on the 26th October 1981, after falling ill while on holiday in Iceland the month earlier. He had been president for more than 25 years, and at the age of 81, he hadn’t thought of retirement until his health deteriorated. He died days before his 86th birthday on the 31st August 1986, at the presidential residence of Tamminiemi, which had been, for all intents and purposes, his home for the last 30 years. The government had believed it would worsen his health if he were to be moved. He was buried with state honours at the Hietaniemi Cemetery and was survived by his wife, Sylvi, whom he married in 1928; their sons, Matti, who followed his father into government, and Taneli, who was a diplomat. 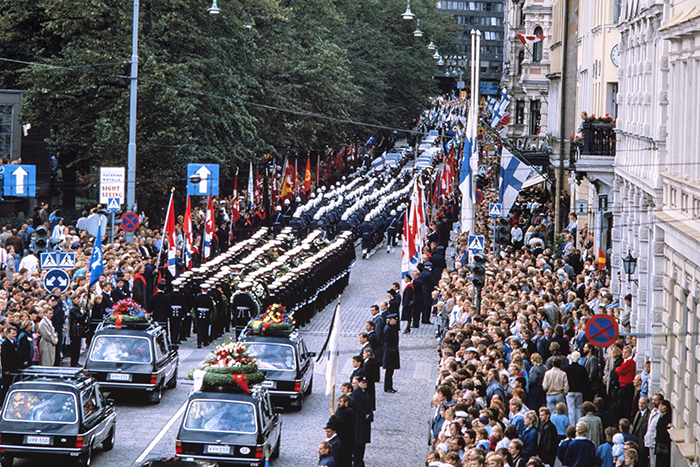 The funeral cortege of Urho Kekkonen in Helsinki, 1986. (Photo by Matti Karjanoja)