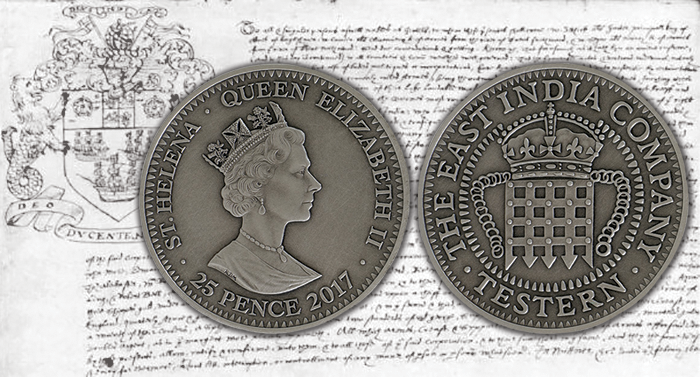 The government and treasury of St. Helena have launched (1st August) a new collector coin which is steeped in history and famous for its distinctive design. The “testern,” which was minted for a specific purpose, is one of the world’s most extraordinary coins. These coins not only expanded trade and commerce, they became instantly recognisable for their design and were ultimately sought after as instruments of trusted currency wherever they was used.

Originally minted in 1600 for the British East India Company’s use in overseas trade, the historical testern coin was nicknamed “Portcullis Money” for its notable design. The testern’s reverse design included a crowned portcullis gate with chains, initially part of the crest of King Henry VII, and grandfather of Queen Elizabeth I. It was she who signed the royal warrant in 1600 granting the “Governor and Company of Merchants of London Trading into the East Indies”—precursor to the British East India Company—their trading privileges, which continued uninterrupted until 1874. 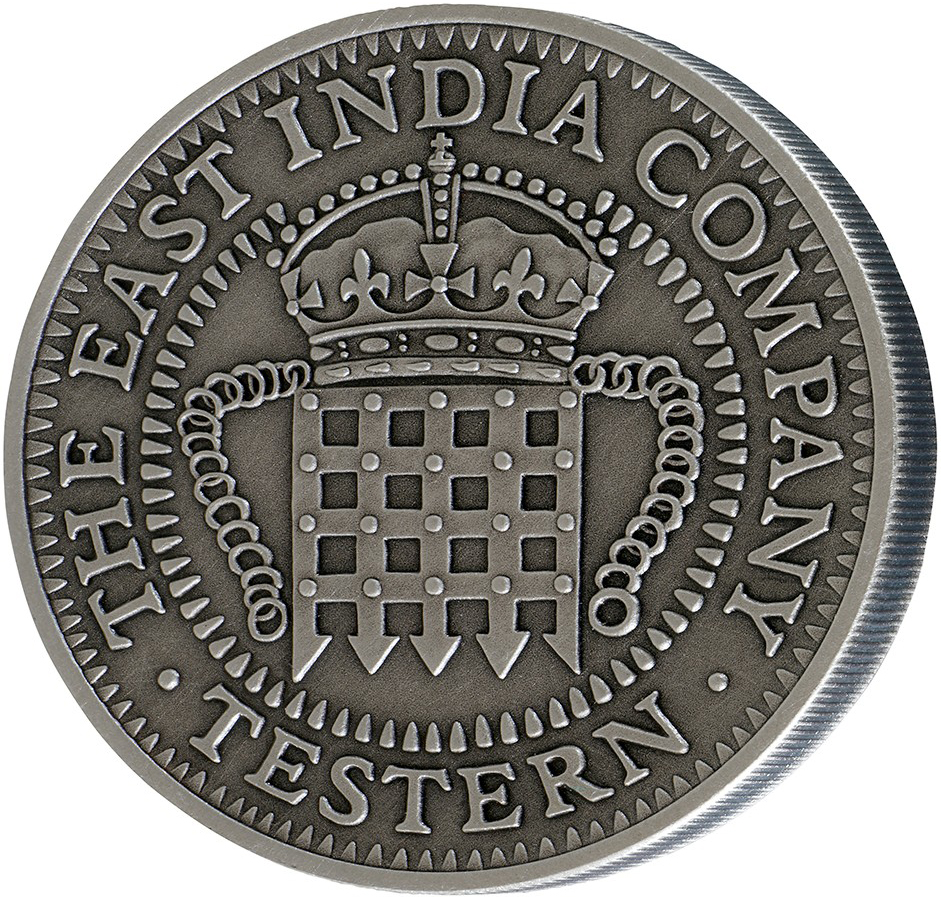 The silver coin is based on the original 8-testern specification and is issued by the government and treasury of St. Helena, who have had close and historic ties to the East India Company. The reverse side emphasises these ties, as the text EAST INDIA COMPANY is prominently part of the design and displayed at the top of the coin. The reverse design is based on the iconic portcullis engraving on the coin’s 17th-century predecessor, such that the crowned portcullis gate and chains are placed in the centre with the word TESTERN positioned below the gate. 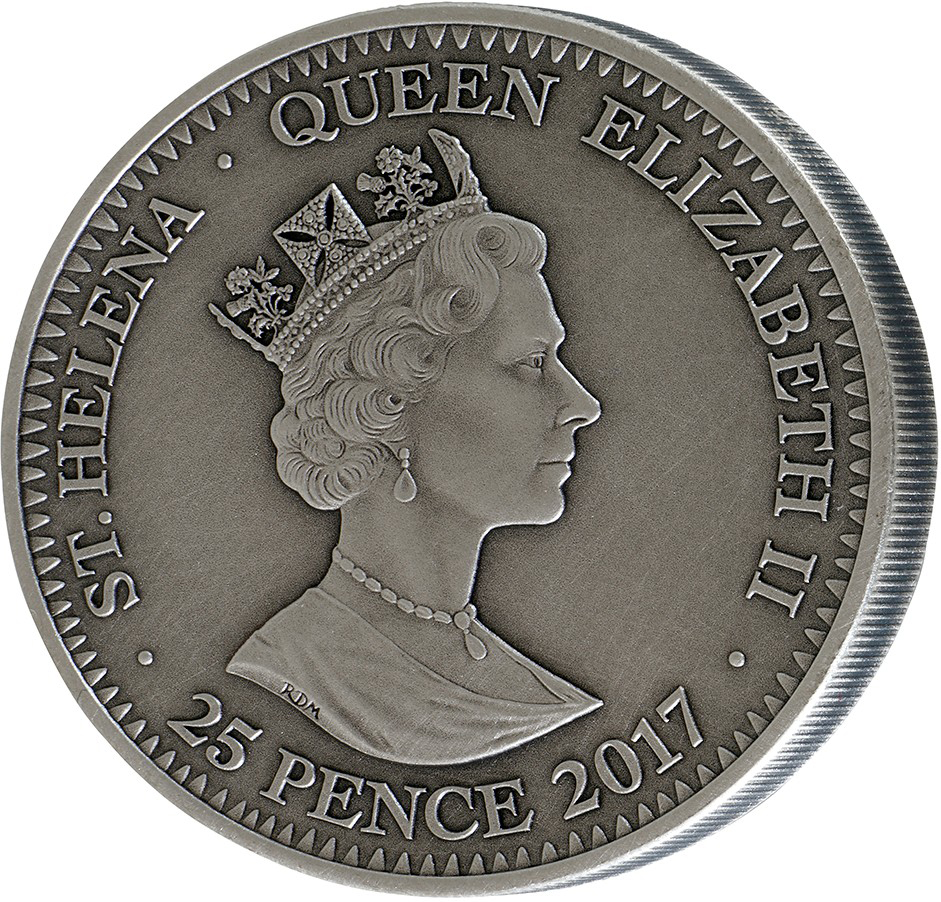 An elegant effigy of HM Queen Elizabeth II created by renowned artist and sculptor Raphael Maklouf is depicted on the obverse, along with the coin’s face value of 25 PENCE and the year of issue, 2017. The coins are specially minted with a delicate antique finish to accentuate the classic Portcullis design.

Each coin is presented encased in a protective capsule and custom presentation box, accompanied by a certificate of authenticity confirming its specifications and quality. For additional information on this and other coins issued by the government and treasury of St. Helena, please visit the website of the East India Company. Legends have to begin somewhere, and this is true for one of the world’s first trade coin, the testern. Britain’s very first colonial coinage was minted under the direct instructions of Queen Elizabeth I in 1601 with a subtle message to the world of the nation’s military and economic might. The coin’s purpose was to be included on the East India Company’s maiden voyage, and it was the very first currency minted exclusively for trade outside Britain. Following the defeat of the Spanish Armada and the death of King Phillip II of Spain, the English colonial era of exploration and empire began in earnest.

The shrewd monarch insisted that the company take specially minted coins on each voyage as set out in its Charter of 1600. According to legend, the queen, who represented “Gloriana,” wanted the world to know that she was just as powerful as an archrival, the King of Spain—if not more so, now that the Spanish were well and truly a defeated European power. To demonstrate her might she would need her own trade currency, which, in order to be effective, would need to be based on the existing international trade coin of the time, the Spanish real, in both size and weight. Thus, coins of 1, 2, 4, and 8 weights were produced at the Royal Mint, located in the Tower of London. They were produced with the same weights as the Spanish reales, but of course with designs which were unmistakably British. The obverse side was decorated with the queen’s crowned arms between the additional crowned initials E and R, and also included the legend ELIZABETH D G ANG FR ET HI REGINA (Elizabeth, by the Grace of God Queen of England, France, and Ireland).

An even stronger symbol was included on the reverse of these silver pieces: the mighty Portcullis Gates of Westminster Palace. Strong enough to defend the seat of the monarch and keep out enemies, the gates were shown crowned and with chains on either side. The inscription POSVI DEVM ADIVTOREM MEVM, meaning “I have made God my helper,” was another a message of divine right and power.

Thus, the testern coinage was deliberately minted to the exact same specifications as the Spanish real denominations. The Spanish 8 reales, internationally recognised Spanish trade coin, was colloquially known as a “piece of eight” and considered to be the first global trade coin. It was now being replaced with the coin of the realm that had defeated them in battle—Great Britain. Spanish and Spanish American coins were commonly called “reales” and “dollars,” and it is likely that testerns were called by these names as well during the very short time they were in trade.

Just over 6,000 pounds’ worth of “Portcullis Money” (so-called because of the portcullis gates depicted on the reverse) was loaded onto four East India Company ships leaving Woolwich, England, in February 1601. Interestingly, not all the coins were shipped, and the EIC opted to strike an extra 20 pounds’ worth for presentation to the lords of the council and other dignitaries. It is probably these coins that make up the few available examples to collectors today. Most that sailed to the East on company ships were likely to have been melted down and reminted to local currency.

Queen Elizabeth I would not live long enough to see the full significance of her initiative when she granted the East India Company its first monopoly of trade with the East. Good Queen Bess died three years later and was succeeded by her kinsman James VI of Scotland, whose accession to the English throne would lead to the United Kingdom of both countries a century later. The granting of a royal charter by Elizabeth I was also the beginning of over 270 years of empire, trade, and conquest stretching from India, Singapore, and Hong Kong in the Far East to the Americas. The testerns were minted only one year, but their significance is unmistakable in terms of their importance for delivering a message of strength and wealth to the rest of the world. Today, testerns are considered some of the rarest coins. With the testern’s exciting history and background, it truly tells a unique tale all its own.